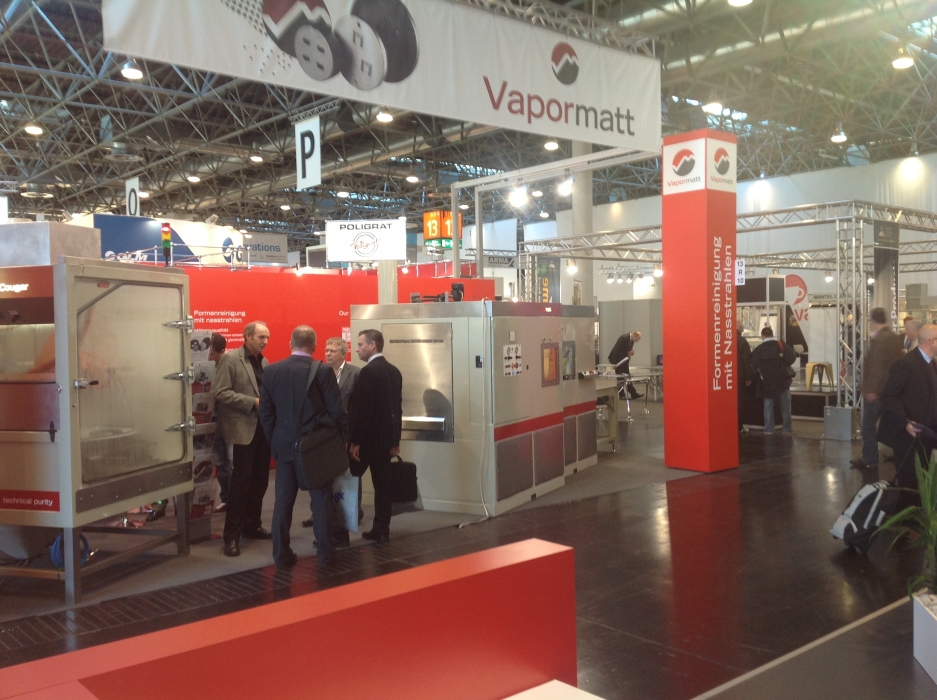 Wet blast specialists, Vapormatt, is reporting significant business development as a result of its participation at the Aluminium 2012 Exhibition in Germany (October 8 – 10). The company highlights the industry as a key user of its system designs – particularly in the field of extrusion die cleaning.

“This is the fourth time that Vapormatt have participated in the show and have noted an increased interest in our machine design from areas of the world which are showing growing and emerging markets for the extrusion industry,” comments Mick Teague, Sales Director. “We were approached by companies from countries such as Brazil, Turkey and Russia at the event which, we believe, is evidence of a growing potential for wet blast application in each region and a corresponding awareness of our machines’ capabilities,” he says.

Vapormatt used the show in Dusseldorf to highlight three of its stand-alone ‘closed loop’ machines, each of which demonstrates Vapormatt’s leading position in providing wet blast technology. These include the automatic Vapormatt Cougar Radial, which features an 1100 mm diameter work table and a four blast gun arrangement, the Vapormatt Jaguar, which can deliver a multi-stage process that achieves complete coverage of critical surfaces during a single process, and the smaller Vapormatt Panther, which is centred on manual operation that is ideal for small dies or where throughput requirements are lower.

“By exhibiting these machines, we were able to demonstrate our ability to supply machines of varying capacities and which are capable of either automatic or manual operation,” continues Mick Teague. “This was important given the breadth of new interest shown at the exhibition – including potential customers who have not made use of this type of technology before.”

The success from the show in Germany adds to Vapormatt’s growing list of achievements worldwide – applications range from the wire and cable industry, precision blasting for tooling firms and nuclear decontamination of hazardous materials. All have gained from Vapormatt’s wet blast technology – the same capability that has now triggered increasing interest in the aluminium sector as a result of the company’s continual process development.