Home News From cleaning to peening: versatility with wet blasting
Share This Page:
02/02/15

From cleaning to peening: versatility with wet blasting 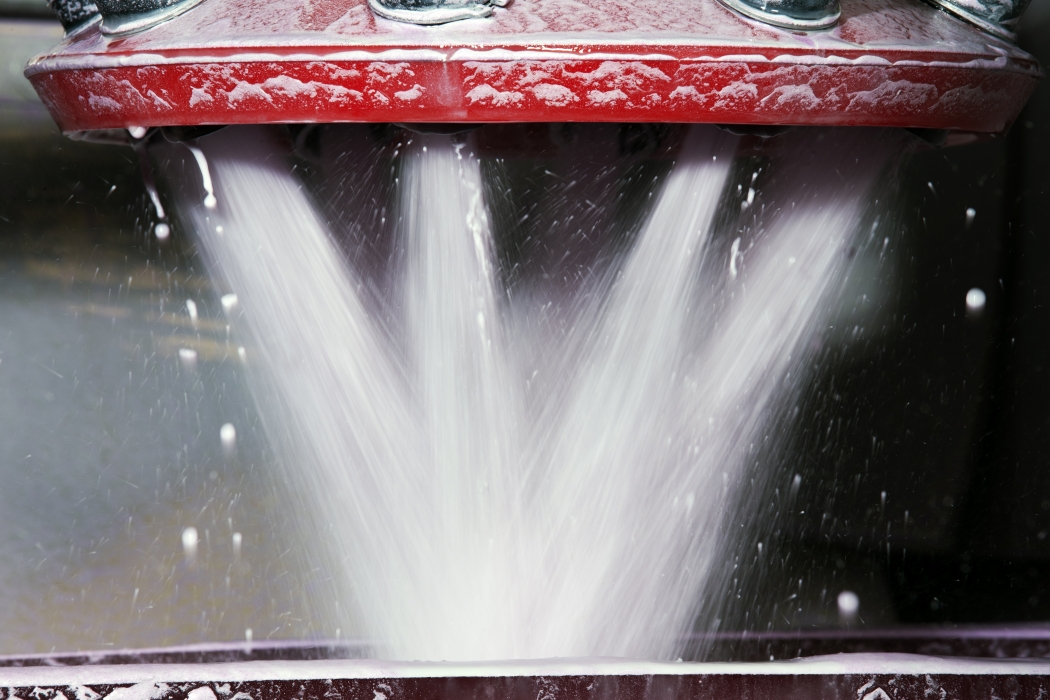 Wet blasting has become increasingly common in the aerospace industry, thanks to its ability to carry out a wide range of tasks – from degreasing components to surface treatment of turbine blades, says Phil Dawes, Sales Engineer at Vapormatt.

Wet blasting has become an increasingly common surface treatment technique in the aerospace industry, although to some it appears to be nothing more than dousing the surface with dirty water. But the technique has hidden depths: the water contains abrasive particles that can be shot against the surface with varying force.

By careful choice of particle, nozzle pressure, water temperature and many other factors, the technique can be adapted to carry out a range of aerospace industry tasks: peening of turbine and fan blades; preparation of surfaces for bonding and painting; paint stripping – without substrate damage; degreasing, de-rusting and descaling; and, general cleaning for overhaul and crack detection.

Wet blasting uses a suspension of solid particles in a carrier liquid, most often water, to treat the surface of a material. The suspension, known as the ‘slurry’, is mixed with a pressurised gas, and forced through a nozzle and accelerated over the material’s surface. The elements of the process can be varied widely in order to have a particular effect – from gentle dirt removal to full surface treatment.

It means that this single process can achieve a wide variety of industrial tasks, ranging from mild cleaning right through to increasing roughness for bonding and surface peening. This huge versatility is making the technique increasingly popular within aerospace. It is becoming increasingly preferred to its main alternative – dry blasting – because of its many advantages: greater versatility, an ability to process parts that may be oiled or greasy tasks; inherent safety, as it creates no dust or charged particles; better surface finish, due to the lubricating and cushioning effect of the liquid and much lower wear on working parts and a reduced consumption of consumables.

Slurry is the very lifeblood of the wet blasting process. What comes out of a wet blasting nozzle may appear unchanging, but many process parameters can be altered and controlled to vary the effect, depending on the component being treated and its required application. The most advanced systems use software control to combine and monitor the flow of gas, air and solids.

A number of factors alter the effect: the number (and nature) of nozzles, and the angle at which they are deployed; air pressure, which determines the speed at which the slurry shoots out of the nozzle; and the acidity – or alkalinity – of the sump solution, which will determine its effectiveness in processes such as cleaning or surface activation for coatings.

But the nature of the abrasive particle will have the largest effect. Smaller particles will have a finer finish and effect than larger particles. Aluminium oxide, for example, is used to achieve a ‘cutting’ effect and create a matt finish, while a silicon glass bead will give a ‘polished’ finish. Many other media can be used, such as ceramics, stainless steel, silicon carbide and even walnut shells.

The addition of a liquid to the wet blasting process makes it highly adaptable: by acting as a lubricant for the abrasive medium, slurry can flow across complex shapes and into hard to reach areas to ensure a more uniform and complete finish. Water also eliminates some of the inherent challenges found in the dry blasting process, the elimination of dust provides a safer work environment, and by creating no static build up there is no threat of a blasted component losing its adhesive properties.

But one of the main advantages is undoubtedly its superior surface finish: the lubricating effect of wet blasting creates a flow of abrasive over the material, leading to a surface that is better prepared for coating, painting or bonding or, in cosmetic applications, a better looking component.

Some of its other advantages include: small footprint; low wear on parts; low breakdown of solid media; effective filtration of abrasive particles; and, no need for pre-cleaning.

The diagram below shows how the wet blasting process works.

The aerospace industry uses this single technique to carry out a whole series of operations.

When aircraft tyres are changed, the wheels are inspected for cracks using non-destructive testing. The wheels are cleaned using low-pressure wet blasting that creates a clean and ,sometimes, etched surface that makes inspection easier. The process has many other applications in the industry, such as removing paint, preparing composites and degreasing. But by far the most robust technique is peening, which is used to condition the surface of critical parts like turbine blades. This puts the surface under compression to make it resistant to cracking, and can extend component life by more than a thousand times.

Peening is traditionally carried out by dry blasting, which hits the surface with great force. But wet blasting is found in an increasing number of specifications. The enhanced controllability will offer not only repeatable results but also varying degrees of intensity. One leading aerospace manufacturer uses Vapormatt’s wet peening process for this very reason. It also makes economic sense, as the company already uses wet blasting for many other operations.

Component size is not a limiting factor in wet blasting, as it can be used for everything from nuts and bolts to wing spars. It is common for tiny fixings to undergo the same surface treatment as a large forging, especially if the parts are later attached together. But this can be done in different ways. Small fixings, for example, would be treated in bulk in a tumbling barrel, in order to save cost. But a part like a wing spar would be set up in a large chamber, then blasted by either robotic or servo-controlled nozzles moving across its surface.

Traditionally, large parts were processed manually by an operator with a protective suit and a blasting gun. Some processes, such as cleaning aircraft wheels to test for underlying cracks, are still done manually in a cabinet. But automation has become far more prevalent in wet blasting as control and quality assurance becomes ever more critical.

For large parts like wing spars, automation ensures consistency. In highly regulated industries like aerospace, the quality of each part needs to be identical. This is achieved by treating each one in exactly the same way, with no variation. A good example is when treating the surface of an aerofoil, allowing a de-icing strip to be glued to it. Automated wet blasting ensures consistent surface cleaning, which guarantees an identical bond every time.

There are around 15 parameters to control in wet blasting – including air pressure and volume, slurry pressure, water temperature and nozzle speed – making it far from straightforward. However, as long as these parameters can be measured, they can be controlled.

It is not enough simply to measure these parameters. The process must be controlled automatically – and one of the most critical factors is the concentration of particulates in the slurry. As the abrasive particles break down during wet blasting, the process starts to lose its effectiveness. More abrasive particles must be added to the slurry, but in the correct proportion to replace broken down or contaminated media. This is especially important in critical processes like peening.

The concentration of abrasive particles needs to be 15-20% by weight, and maintaining this relies on accurate process control. Vapormatt does this using its patented elutriation towers. These work on the principle of Stokes’ Law, which states that the rate of fall of a particle through a fluid is related to its size and density. So, as the slurry is recycled, it is fed into a column of water that is pumped upwards: heavier particles fall quickly to the bottom, while the lighter, unwanted, particles remain at the top and are removed.

The second stage of this process – to measure how many ‘good’ particles are left – is done by constant monitoring of slurry density with a flow meter. By detecting when too many particles have broken down, new particles can be added automatically. High end wet blasting machines are now fitted with dosing systems that are linked to PLC’s that are trigged by user defined set points through a HMI.

It’s hard to think of a process with such a range of application: gentle enough to remove the protective layer from a printed circuit board, yet with enough power to shot-peen a turbine blade. It’s this flexibility that will ensure it continues to be used widely in the aerospace industry.