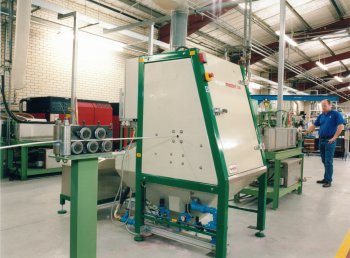 The new ‘Vapormaster 1210’ wire preparation system, specially developed by Guernsey based Vapormatt Ltd, in conjunction with Holton Machinery Ltd, Bournemouth - a world leader in the manufacture of equipment for the production of aluminium and copper extruded profiles using the ‘Conform™’ process and a wholly owned subsidiary of the Outokumpu Group - represents a major step forward in the surface preparation of the wire rod feedstock used in the extrusion process.

Holton Machinery’s latest ‘Conform™ 2000’ manufacturing process is capable of producing complex thin-wall aluminium alloy extrusions in small profiles to the highest degree of accuracy.  Extrusions made by the process are used in a variety of critical applications in, for example, the electronics, communications and defence industries.

The Vapormaster 1210 has been found in carefully monitored production trials to achieve a much better result thanconventional alternatives such as ultrasonic or mechanical brushing preparation systems, and is safer and more environmentally acceptable than processes that use harsh or toxic chemicals. The high intensity preparation action provided by the Vapormatt machine removes deep-seated contamination and corrosion from the rod or wire surface and leaves a completely uniform finish.

At the same time, the Vapormatt process substantially reduces preparation time and associated labour costs.  Added to this, the high controllability of the process eliminates unnecessary stock removal.

The machine is now being marketed jointly by Vapormatt and Holton Machinery as an integral element of Holton’s sophisticated Conform™ 2000 equipment, which incorporates the company’s ‘Dual Access Dynamic Shoe Positioning’ (patent pending) system for the precise positioning of extrusion tooling.  The result of a six-year development programme, this is an innovative measurement and positioning system that enables tooling to be monitored and adjusted continuously during the extrusion process to optimise tooling geometry and process efficiency.

The finish of the aluminium wire rod or strip feedstock entering the Conform™ production line is also critical to the overall efficiency of the extrusion process.  Contamination during transit and handling and surface oxidisation, must be removed from the feedstock prior to it entering the extrusion machine.  Any contamination getting through the process can lead to expensive rejects during subsequent production processes, such as plastic coating.

The Vapormaster 1210 wet blasting machine has been designed to ensure that the feedstock is prepared to the highest standards possible.  The machine eliminates virtually all of the oxide layer (100% removal is obviously not possible unless preparation takes place in an inert atmosphere), and removes other surface contamination with its simultaneous surface preparation, degreasing and rinsing action.  It operates continuously, with the feedstock passing into and out of the wet blasting enclosure on a roller support system via sealed apertures. The purpose-designed preparation enclosure incorporates a specially designed wet blasting “manifold”, equipped with eight blast nozzles, which ensures all-round thorough surface preparation as the feedstock passes through it.  The abrasive media used is based on aluminium oxide and media dosing is automatic.  After the preparation process, the feedstock is fed directly into the extrusion machine.

Because the wet blasting process employs water as well as air as an abrasive carrier, its action is less aggressive than dry blasting since the water acts as a buffer and lubricates the particles on impact, enabling very smooth finishes to be produced without damage to the surface.

The whole wet blasting process is self-contained, with the machine working on a closed-loop basis - process water is continuously filtered and waste material and debris is directed to a containerfor regular removal by a trade waste collection service. Other features of the Vapormaster machine include:  an advanced pump/sump design which prevents blockages, even after prolonged shutdown; the use of long-life urethane components in areas subject to particular wear; low air consumption processing nozzles; and a rigid steel chassis with inset non-corrosive grp panels to reduce noise.  The machine has also been designed to minimise maintenance.

Wet blasting uses water and an abrasive medium accelerated from a nozzle with compressed air, to provide a very effective and environmentally friendly, self-contained surface preparation and surface conditioning process.

The abrasive particles used in the system can be as fine as talcum powder but due to the water carrier and - unlike dry blasting processes - no dust or static electricity is created.  Biodegradable degreasing compounds can be added to the water tofurther extend the capability of theprocess - components can therefore be degreased and super-finished in a single operation.

Filters built into the machine remove the oil and blast debris on a continuous cycle.  Many different types and sizes of abrasive media can be employed in the process, depending on the application, from ruby hard alumina to soft plastics.